What are Powderpost Beetles? 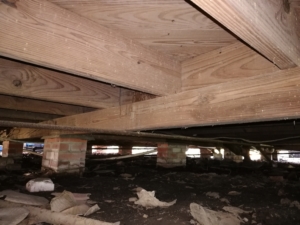 Powderpost beetles are a type of wood destroying insect that can found all over the world. They wreck havoc on a homes structure and are second only to termites in the amount of destruction they create. They can go unnoticed for many years, despite being active. Their presence often comes as a surprise for many homeowners.

Some types of powderpost beetles prefer only hardwoods, such as cabinets, furniture and flooring. In the Acadiana area, Anobiid powderpost beetles are most common. They attack both hardwoods and softwoods. In the crawl space under a pier home, is where most beetles can be found. Sub-flooring, wood beams and floor joists are most susceptible to them.

Powderpost beetles need damp wood with a moisture content of at least 14% to survive. Damp crawl spaces, like we have in South Louisiana, provide an ideal environment for the beetles to breed and multiply. Powderpost beetle damage closely resembles “shot” damage from a shotgun. The holes are usually smaller than the hole left behind from a BB. This is normally between 1/16 to 1/8 of an inch in diameter. There may just be a few holes in one area or many throughout the entire structure. If the powderpost beetles infestation is active, you may also see powder coming out the holes or sitting below the holes.

How to get rid of Powderpost Beetles? 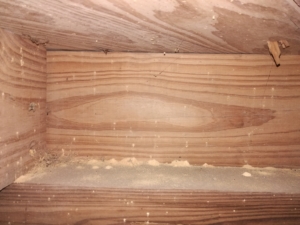 Finding powderpost beetle damage on an older pier home is very common in South Louisiana. In many cases the home has been treated in the past and there is no longer an active infestation. There may be no need to worry about repairs if treated early. Having the home treated as soon as possible by a licensed pest management professional is crucial. If ignored, floors may develop soft spots or even bigger structural issues.

House Call Acadiana is a local franchise based out of Lafayette Parish, Louisiana. Lafayette is called the ‘Hub City’, being centrally located in Acadiana, or ‘Cajun Country’ as it’s famously known worldwide. The area has a growing real estate market with an especially high amount of new construction. House Call Acadiana home inspectors have been servicing the Acadiana area since 2009.

We love hearing from you anytime!
Call, text or email us if you have any questions or use the online scheduler to set up a home inspection.